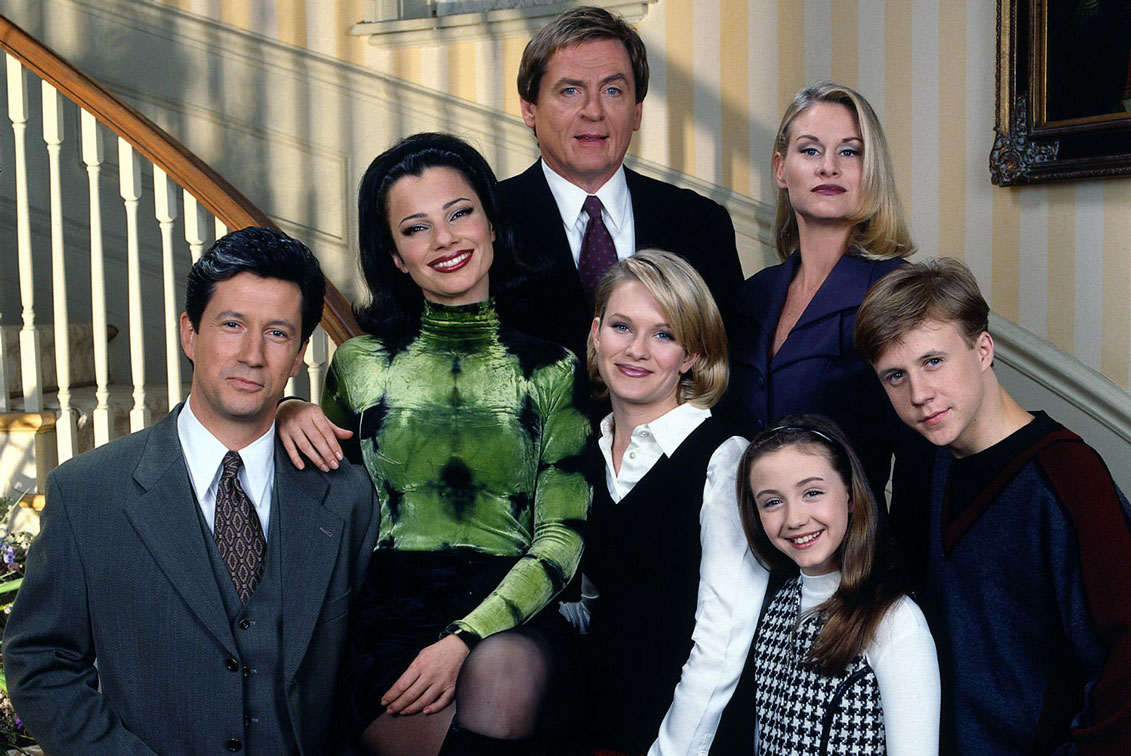 A classic comedy show in the purest sense of 60’s sitcoms — a “sweetened” studio audience, big clunky sets, slapstick acting — what a throwback. From what I’ve seen in only watching a handful of episodes, it’s basically a twist on the ’60’s show The Farmer’s Daughter, except the “Nanny” is a gold-digger in this one.

Coincidentally (or is it?), there are three kids in this show, the same number that were in that other “Nanny” show, Nanny and the Professor.

This show could also compare as a single-dad version of Hazel, though Fran Drescher sure doesn’t look like Shirley Booth!

Here’s how CBS is explaining The Nanny in its press releases:

“THE NANNY focuses on the life of Fran Fine, the Nanny, a quintessential girl from Queens with a face out of Vogue and a voice that seems to emanate from her nose. She first appeared peddling cosmetics on the doorstep of widowed Broadway producer Maxwell Sheffield and stumbled into the life of a nanny. Her bludgeon-like honesty and offbeat nurturing have captured Maxwell as well as his kids. Maggie, 17, has blossomed under Fran’s care from an awkward teen to a confident young woman. Brighton, 14, is brilliant, devious and quick-witted, and Grace, 9, no longer confides in a therapist since the arrival of Fran. Also on hand are C.C. Babcock, Maxwell’s snooty but elegant business partner, who fantasizes about a love relationship with him, and Niles, the sardonic butler, who takes a fiendish pleasure in poking holes in C.C.’s pretentiousness and sees clearly that Fran is the best thing that’s ever walked through the mansion door.“

Update May 13, 1998 — A sure sign of the imminent demise of a series: The Nanny married her boss! It happened at the season finale, except that the two of them fell off the side of a yacht. Tune in next year to find out if The Nanny will suffer under the Mike Brady Clause … or suffer the Curse of Series Weddings Death Knell, like My Three Sons and The Farmer’s Daughter

Update April 24, 1999 —Doom strikes. The wedding proved to be the cannonball through the wheelhouse. Boom! Precipitous ratings declines spelled disaster — so bad that CBS shelved the last five episodes for network viewing and decided on just showing the series finale during May sweeps. So long, Sheffield family!

Update April 28, 1999 — Weirdness strikes. Viewer fan mail bent CBS into a scheduling pretzel – they decided to air the last six episodes in the order 6-1-2-3-4-5, so that they didn’t lose the May sweeps and still appease the Nannyphiles out there.