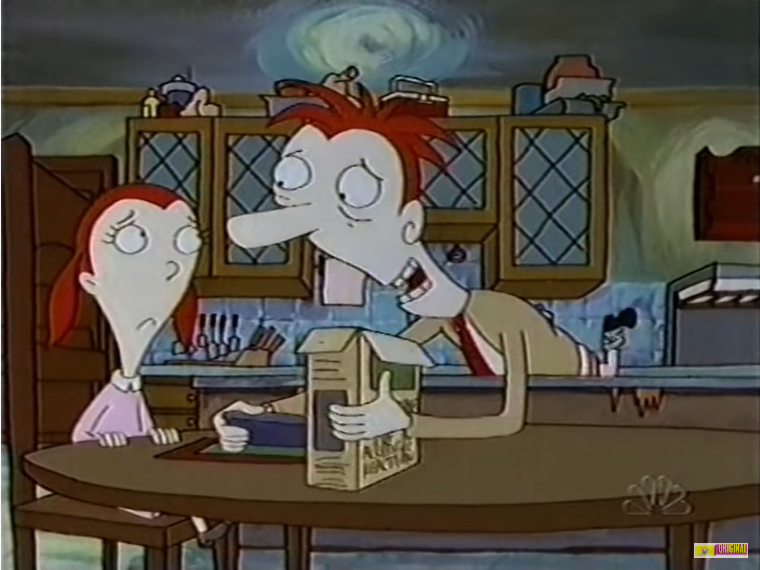 I asked NBC if they’re planning on ANY TV Single Dad shows for 1998. They say “No.” — Then, suddenly I find a press release in my e-mail:

NBC will telecast six episodes of the hit British animated series “Stressed Eric,” an irreverent look at the life of a stressed- out, divorced father of two in London, beginning Wednesday, August 12 (9: 30-10 p.m. ET) . The series originally aired on BBC2 and was Britain’s first half-hour animated sitcom.

The show, which became an instant favorite with British television audiences, was named Best International Co-Production and Best Scenario at the British Animation Awards in March 1998. “Stressed Eric” represents the first time NBC has aired a regular primetime animated series since “The Famous Adventures of Mr. Magoo” aired on Saturday nights (8: 30-9 p.m. ET) during the 1964- 65 television season.

Although the original dialogue will remain the same, the voice of the title character, Eric Feeble, will be redubbed by actor Hank Azaria, and he will be portrayed as an American living in London. Eric is a middle-aged, middle-class worker trying to cope with the hassles of modern life. Eric’s wife left him for a Buddhist; his daughter, Claire, has allergies; and his son, Brian, never speaks. Among the other characters in the series are Eric’s domineering boss, P.P., his irritating secretary and his incredibly successful neighbors, the Perfects.

“Stressed Eric” is a co-production of Absolutely Productions, the BBC and the Emmy Award-winning U.S. animation studio Klasky Csupo. Executive producers for the NBC version are Miles Bullough for Absolutely Productions and Carl Gorham and Howard Klein for 3 Arts Entertainment. Series creator/writer is Carl Gorham. Animation is by the Los Angeles-based firm Klasky Csupo (“The Simpsons,” “Rugrats,” “Duckman”) which has won five Emmys and two CableACE awards for its animation.

They could have told me a little earlier…

Watching the first episode, it’s quite a savage show about being a single dad — especially dealing with berserk ex-spouses and bosses. It’s quite pessimistic, and I don’t see how this show COULD have survived more than six episodes.